Femi Adebayo Salami is a prominent Nigerian Lawyer, director, and film actor. Also, Femi Adebayo is known to be the special adviser to the Kwara State Governor on Culture, Arts, and Tourism. Currently, he is 43 years of age

Olufemi Lawal Adebayo preferably and mostly known as Femi Adebayo is a legendary and comic movie actor. He was born on the 31st of December, 1978, in Lagos, southwestern Nigeria. He is a native of Ilorin, Kwara State.

In addition, he is the son of a renowned actor Adebayo Salami also known as ‘Oga Bello’ and Alhaja Risikat Adebayo. The Nigerian actor was bred in a polygamous family with his seventeen siblings.

Femi Adebayo started acting at the age of 7 in 1985 and he starred in one of his father’s movies titled ‘Ogun Ajaye’ when he was 13 years old.

Furthermore, Femi Adebayo is widely known for his talented, energetic, and comic nature in the Nollywood industry. He is famous for his funny roles in the hilarious Yoruba Comedy Movie he acted titled “JELILI”.
Also, he has featured in movies like “Iya Alalake, The Ghost and the Tout, Mokalik, Sonto Alapata, Buga and so many more.

In addition, the lively actor has featured, produced, and directed over 500 movies.

Also, Femi Adebayo is the CEO of the J-15 media network Nigeria and also the Special Adviser to the Kwara State Governor on Culture Arts and Tourism.

Here are some of Femi Adebayo’s movies: 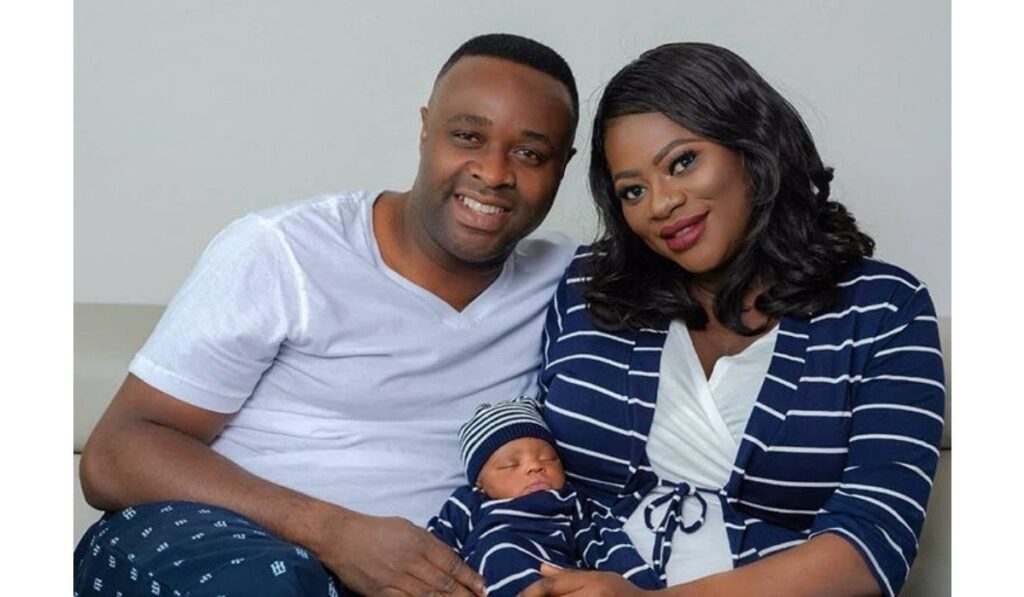 Femi Adebayo with Wife and Son

Femi Adebayo first married a woman named Khadijat Adebayo, who bore him three adorable children before they divorced. He waited years after their divorce before meeting another woman named Omotayo Adebayo.

After his first failed marriage, the actor waited eight years before giving another woman a chance, marrying his current wife eight years after his divorce from his first wife.

On October 9, 2016, he officially got married to Omotayo Adebayo, and the new wife gave him a son, making Femi Adebayo a father of four, three from his ex-wife and one from his current wife.

Femi Adebayo is a father of four, with a girl and twin boys from his first marriage and a son from his second. Firdaus Niniola Adebayo is the first female child, followed by his twins Fadhlulrahman and Fadhlullah Adebayo, and his last son, Fadhil Olarewaju Adebayo from his current wife.

His father, Adebayo Salami, a devout Muslim filmmaker who goes by the stage name ‘Oga Bello,’ is a versatile actor, film producer, and director. He was born on May 9, 1953, in Lagos State, where he grew up and completed his primary and secondary education.

Furthermore, Adebayo Salami is married to two women and the father of 18 adult children, five of whom work in the film industry and have followed in their father’s footsteps. Femi Adebayo, Tope Adebayo, and Kemi Adebayo are the most well-known of them.