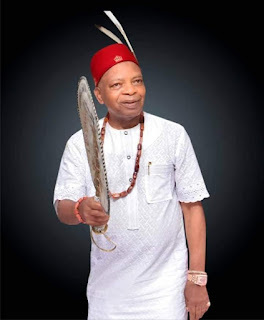 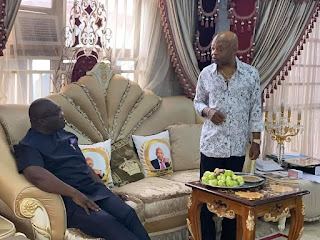 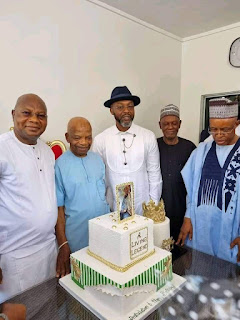 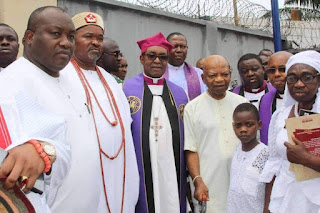 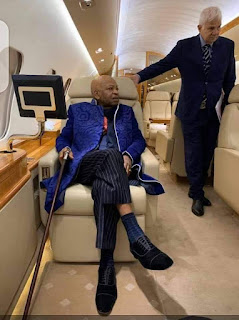 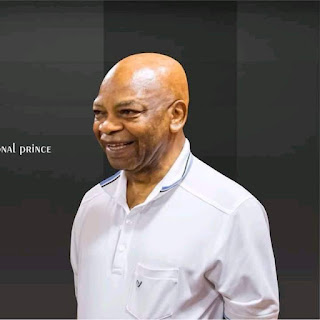 Who Is Prince Arthur Eze?

Biography, Wikipedia: Who Is Arthur Eze?

Prince Arthur Eze is seen as the richest Igbo man from Anambra State. He is the chairman of Orlanto Atlas Petroleum, the largest indigenous oil exploration firm in Africa.

Arthur Eze is also a philanthropist and a political leader.

Prince Arthur Eze is the chairman and Chief Executive Officer (CEO) of Atlas Oranto Petroleum; he is also a philanthropist and a political leader.

He is not only the owner of the largest privately held oil exploration and production companies in Nigeria, but he is also a prince born into a traditional royal family in the state.

Atlas Oranto Petroleum was founded by Arthur Eze in 1991. The company currently has 22 oil and gas licenses in 12 jurisdictions across Africa. It has assets in Nigeria, Equatorial Guinea, and several Atlas Oranto operated blocks. To date, the company is the largest holder of oil exploration blocks in Africa.

Atlas Oranto has regional offices and representatives across core investment locations in West Africa with its technical base located in Lagos, while its headquarters is at Abuja. The chairman chose Abuja as its headquarters so, that the management of the company can have direct access to African policy-makers in the region. The Eze family has ownership of the company stock and all the shareholders are involved in the company’s operation.

Prince Arthur Eze is known to be very close to the corridors of power in Anambra, Nigeria, Africa and the world at large.

The Ukpo-born Prince is also known to have donated huge sums of money to political aspirants across party lines over the decades, especially in his Anambra State, without asking for anything in return or breathing down their necks for patronage.

Prince Arthur Eze is a Nigerian Philanthropist from Anambra State. His philanthropic works speak for him.

Over the years, the renowned oil magnate, Prince Arthur Eze, has remained an enigma and a phenomenon in Nigeria’s philanthropic space.

Prince Eze’s philanthropy knows no boundaries, as he doles out to the poor, homeless, sick and needy; no wonder he is known as the Ozoigbondu, the Igbo word for ‘the one who saves lives.’

Prince Eze goes about his charity without blowing his trumpet. To him, philanthropy is just a way of life and not an opportunity to show off.

Arthur Eze has been described as an illustrious son of Ndigbo who has used his wealth to touch the lives of others.

Arthur Eze was among those that contributed to the relief needs of the victims of Boko Haram insurgency, the ‘Russia 2018’ FIFA World Cup, the flood relief efforts in 2013 and the COVID-19 crisis mitigation.

Construction Of An Overhead Bridge In Ebonyi: Though an indigene of Anambra State, Prince Arthur Eze constructed an overhead bridge in Ebonyi State with his funds without asking for government intervention some years ago.

The Ijaw, not Igbo, are the major beneficiaries of this Youth Development Centre. That is nationalism.

N20 Million Donation To Church In Abagana: A church in Abagana community benefited from Arthur Eze’s free giving as he doled out N20 million for musical instruments and renovations in 2015.

Market, Road Construction: He modernized the local market near the Ukpo palace and also created road networks linking the Dunukofia clan with neighbouring towns like Abba, Awkuzu, Ifite-Dunu, and Abagana.

The purpose of the NGO is to establish an organised structure and consolidated channels of empowerment and philanthropy.

*Patron of Ndigbo Lagos’ and adoption into the Ndigbo Lagos Patron Hall of Fame at his 70th birthday.

*Former President Goodluck Jonathan conferred him with the distinguished award of the ‘Officer of the Federal Republic (OFR)’ in recognition of his contribution towards the development of the nation’s economy and humanitarian gesture to the Nigerian people at an event in Abuja on the 14th of November 2011.

*Enugu City Centre Rotary District 9142 named him “Outstanding Citizen of the World” in 2015.

*The Zik Prize in leadership awards honoured him with the ‘Zik Leadership Awards’ in the business category in 2018.

Nickname Ozoigbondu: Arthur Eze is known as the Ozoigbondu, the Igbo word for ‘the one who saves lives, a name he got from his philanthropy.

State Of Origin, Igbo: Where is Arthur Eze from? Prince Arthur Eze is from Anambra State Nigeria.

Arthur Eze is Igbo by tribe from South East part of Nigeria. He speaks Hausa and Igbo.

Arthur Eze attended St. Augustin Secondary School in Nkwere, Imo State in 1970. After his secondary education, he then went to California State University, Long Beach, California to study Mechanical and Chemical Engineering from 1974 to 1978.

Family, Parents, Father, Mother, Siblings: Prince Arthur Eze is from a royal family. He was born into the family of Chief and Mrs Eze, who are his parents in Ukpo Village, Dunukofia.

Speaking about his late father, Arthur Eze said in an interview with Vanguard:

“My father was a member Eastern Nigeria House of Chiefs during the time of Dr. Nnamdi Azikiwe and Premier Michael Okpara. I used to open doors for politicians whenever they came around. I was very small then.

“My father never opposed any leader, be he a Yoruba or Hausa. It is not in our blood. We preferred to live in peace with everybody.”

Wives: How many wives does Prince Arthur Eze have? It’s not clear if Arthur Eze is married to only one wife or more

Arthur Eze Children, Sons, Daughter: Who are Prince Arthur Eze children? Arthur Eze has sons and daughters with his wife.

The names of some of Prince Arthur Eze children are Prince Olisa Eze, Onyeka Eze.

Another of Arthur Eze son is Onyeka Eze who is the founder of  Prince Osisioma foundation.

Is Arthur Eze sick? Yes, Prince Arthur Eze is sick but he has recovered from his sickness.

There is anxiety presently over the health conditions of Prince Arthur Eze, the Anambra State-born billionaire oil businessman, as his health may have deteriorated, forcing him to look pale and sickly.

A new photo and video of Arthur Eze show a sickly look, suggesting that he was either recuperating from an illness or battling with one.

Prince Arthur Eze Dead Or Alive? Burial, Buried? Is Arthur Eze dead? No, Arthur Eze is not dead, he is alive.

There were recent rumours that Arthur Eze, the Igbo Billionaire is dead.

Some even went as far as claiming that Prince Arthur Eze was set to be buried in a big funeral Ceremony.

But it turned out to be fake news after Arthur Eze released a new video to debunk that he is dead.

how much does Arthur Eze worth?

how much is Arthur Eze worth?

What is the current net worth of Arthur Eze?

Arthur Eze Is Rich And Wealthy: How rich is Arthur Eze? Prince Arthur Eze is very rich and an oil Billionaire who is worth about ₦1.34 Trillion Naira in Naira and $6.8 Billion in Dollars.

Arthur Eze Source Of Wealth: How Did Prince Arthur Eze Make His Money & How Did He Become So Reach & Wealthy?

Arthur Eze revealing his source of Wealth and how he made his money and became a Billionaire said that after the Nigerian civil war, he travelled to the North and met people who gave him the contracts that eventually turned him into a billionaire.

Prince Arthur Eze made his money from being close to people in power from the days of military dictatorship in Nigeria.  With the return of civilian rule, he joined the Peoples Democratic Party (PDP) until they lost power at the centre when Goodluck Jonathan was defeated in the presidential (s)election two years ago. The oil mogul swiftly switched to the winning All Progressives Congress (APC).

Prince Arthur Eze recalled how some northern governors during the second republic gave him multimillion naira contracts that changed his live.

“I went to the north; they didn’t know who I was. Former Governor Abubakar Rimi gave me $12 million to build Kano TV in 1980. I didn’t have N1 then.

‘He also called Governor Solomon Lar and he gave me $12 million contract for Plateau TV$12 million. It was the same thing in Katsina, Borno and Kaduna. Then, they put me in oil business. They didn’t care where I came from. Tell me any Igbo man who can do that..” Prince Arthur Eze told Vanguard in an interview.

Arthur Eze and Dangote who is the richest? Aliko Dangote is richer than Prince Arthur Eze.

Arthur Eze and Obi Cubana who is the richest? Prince Arthur Eze is richer than Obi Cubana.

Arthur Eze and Emeka offor who is richer? Prince Arthur Eze is richer than Emeka Offor.

Arthur Eze and e money who is richer? Prince Arthur Eze is richer than E-Money. 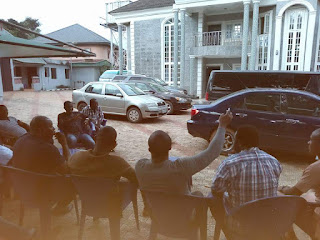 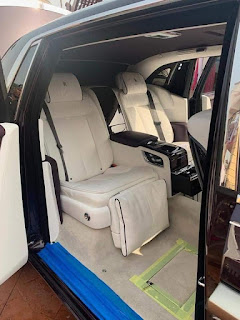 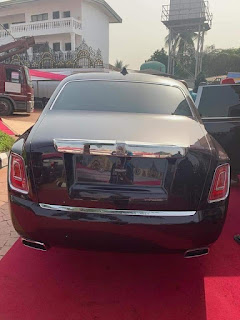 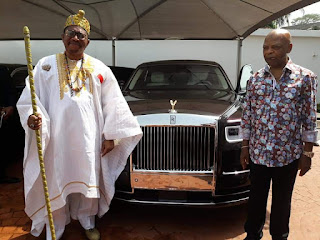 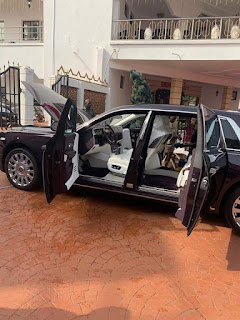 Arthur Eze Mansion in Ukpo: Prince Arthur Eze has a very beautiful house, a mansion in his hometown in in Ukpo, Dunukofia Anambra State, Nigeria. 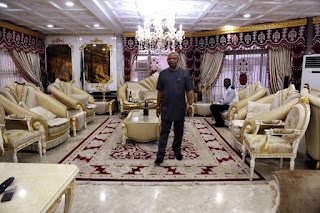 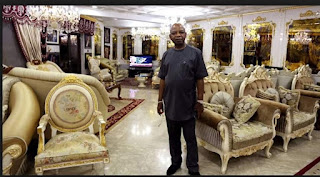 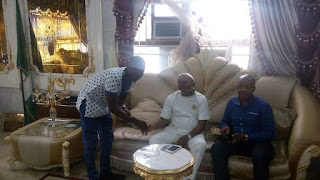 Arthur Eze House in Abuja: Prince Arthur Eze also has another house, a mansion in Abuja, the FCT.

Did Arthur Eze have private jet?

How many private jet does Arthur Eze have?

Yes, Prince Arthur Eze has a private jet. Arthur Eze reportedly has two private jets which he uses in traveling around the Nigeria and the world. He bought Falcon airplane in 2015. 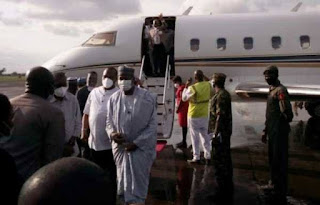 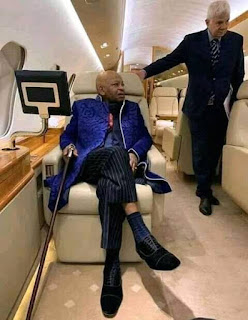 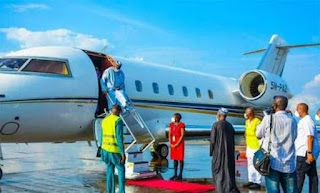 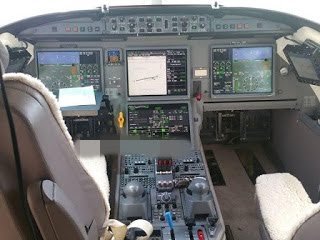 Prince Arthur Eze bought himself a brand new Falcon airplane and it was delivered to him in 2015.